Driving financial inclusion in Nigeria: A feature on Agency Banking 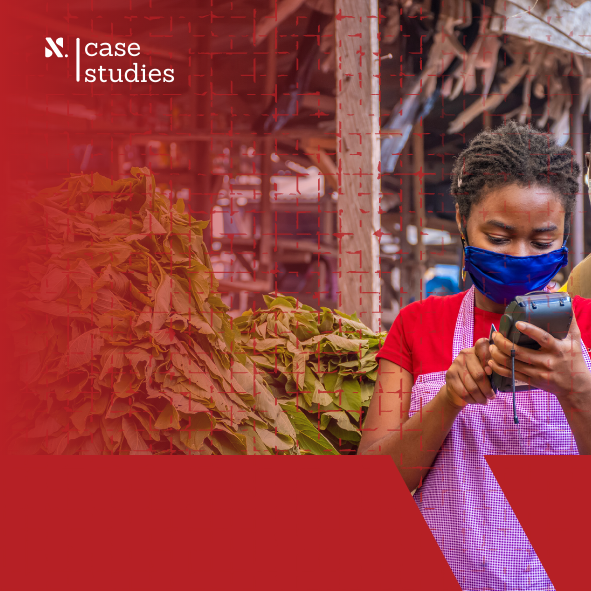 Driving financial inclusion in Nigeria: A feature on Agency Banking

Nigeria boasts a vibrant financial system with over 40 million active bank accounts, 21 commercial banks, and 916 regional and national microfinance institutions. However, behind these stellar statistics lie something far unacceptable in modern economic discourse – more than a third of Nigerian adults are unbanked, underbanked or financially excluded.

Nigeria’s financial inclusion rate at 64.1% as of 2020 is significantly lower than the 80% target for 2020 set by the CBN’s National Financial Inclusion Strategy (NFIS). This financial inclusion rate indicates that about 38 million or 35.9% of the Nigerian adult population remain financially excluded. “At our current rate of progress, we will not reach the 2020 financial inclusion target until around 2030,” Ashley Immanuel, the CEO of EFInA, stated at a public presentation event to launch the findings of EFInA’s Access to Financial Services in Nigeria 2020 Survey.

Nigeria’s financial inclusion rate also lags her African peers like South Africa (93%), Rwanda (89%) and Kenya (82%). Some of these countries have reduced their financially excluded population by primarily leveraging non-bank mobile money, e.g. MPesa in Kenya. To achieve 80% financial inclusion, Nigeria will need to add about 21.7 million people to the financial system. With its capacity to reach the unserved and underserved, agency banking plays a vital role in achieving this goal.

As stated by PayCentre CEO Olaoluwa Awojoodu, agency banking plays a massive role in financial inclusion. “It provides easy access to cash, especially in rural communities where access to financial facilities is scarce. Even the available facilities are not enough to accommodate the teeming population in urban communities. This is where agency banking shines – filling this gap by helping community members access the cash in their bank account and send or receive cash.” 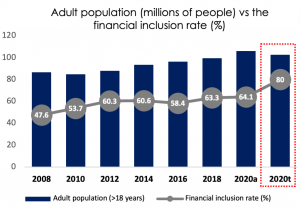 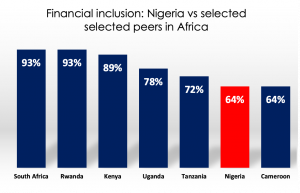 The consequences of the high financial exclusion are broad, including the marginalisation of people, acting as barriers to their personal development, and stimulating their exclusion in the economic progress of the society. Agent banking start-ups like PayCentre are spreading the mission of making financial services available to these target populations while creating a new expanding earning capacity for more people.

Agency banking in Nigeria: The Journey So Far

Agency banking has become the new force propelling the inclusion of the vast number of un/under-banked populations in the Nigerian financial system. This form of banking addresses the limited reach of traditional bank branches. According to the CBN, about five commercial bank branches serve ~100,000 Nigerian adults. In addition, only about 17 ATMs serve 100,000 Nigerian adults, with the majority concentrated in metropolitan areas like Lagos, Port Harcourt, and Abuja.

But how exactly is an agency banking solution expected to enhance financial inclusion?

•  Agency banking brings essential financial services such as bank account opening, BVN registration, deposits and withdrawals, and remittances closer to the people. The proportion of agents offering deposit-withdrawal or cash-in-cash-out (CICO) services has increased from 74% in 2017 to over 90% in 2020.

• They introduce the unbanked/financially excluded population to mobile banking. The practicality of this becomes evidence given that about 35 million unbanked Nigerians own a mobile phone. Herein lies a great deal of opportunities for agent banking principals to explore.

Agency banking in Nigeria has been instrumental to the increase in the country’s financial inclusion metrics. With about 236,940 unique agents in 2019 and 326,444 unique agents in May 2020, agency banking has 53 times more reach than traditional brick-and-mortar bank branches. However, more work still needs to be done to create awareness. EFInA report reveals that at least 89% of the Nigerian adult population are unaware of banking agents even though they are only a walking distance from a potential agent location. SANEF projects a target of 500,000 financial access points and agents by FY2020.

Each of these players has its inherent strengths and weaknesses. Commercial banks and Telecom companies like MTN, Glo, 9mobile etc., rely on their size and broad geographical reach. For instance, as of April 2021, Firstmonie reportedly had over 100,000 agents across 774 local government areas. Similarly, Access Closa has registered over 50,000 agents on its platform.

However, recognising and exploiting areas where competitors fall short has proven a strategy to gain market share for rapidly expanding start-ups like PayCentre, which currently has a network of 60,000+ agents. Driving a solid value proposition, capitalising on innovative capability, and increasing the number of agents are helping it to bring down the cost of operations and boost profitability and overall efficiency. Personalised training for agents to keep them up-to-speed on industry trends, providing bespoke feedback, engaging in strategic collaborations, enhancing agency infrastructure, and expanding to other locations with a significant presence of the unbanked could prove a game-changer for PayCentre in the long term.

Agency banking during the COVID-19 lockdown

The pandemic led to a surge in the popularity of agent banking, a model that simplifies access for the unbanked and underbanked. With limited activities in the banking halls, long queues, and sit-at-home orders, many customers shifted to bank e-channels and agent banking merchants because of their proximity. As a result, the number of agents rose sharply by about 38% to 326,444 within the first half of 2020, signifying the increasing appetite for agency banking. Accordingly, the total agent transaction volume stood at nearly 19 million as of April 2020 compared to 5.6 million in February 2020 (pre-pandemic period).

During the pandemic, some agents discovered a new operating model – small, cash-based businesses serving local communities had difficulties depositing cash into their bank accounts. In contrast, agents experienced issues accessing cash from banks to rebalance their float. This birthed a new model to rebalance float and better serve customers’ financial needs. Agents collected money from these small business owners, distributed the cash to customers who needed to withdraw some money, and funded their agent accounts with those transfers to enable deposits in the small business owners’ accounts.

However, not all agents knew or benefited from this new operating model. A report by EFInA indicated that c.80% of financial agents surveyed experienced a negative impact of the pandemic on business. A reason for this could be the difficulties some agents experienced rebalancing float and having to depend on ATM withdrawals and borrowings from family and friends, which were largely unreliable and increased their cost of operation.

According to Olaoluwa, while some agents could not operate during the lockdown, those who could work experienced a boom due to irregular bank opening times and people needed to send and receive money. PayCentre saw over a 100% increase in new agent signups in 2020 compared to 2019 and 13% in transaction values during the lockdown compared to the previous quarter. To help their agents make the most of the peculiar situation, they prioritised resolving customer disputes by reducing the resolution timeframe from 3 working days to 24 hours. The company also embarked on several COVID-19 community projects and invested in health and safety education for its agents. “We wanted our partners to be safe because they have a lot of physical contact in their operations. We also provided sanitisers at low prices and face masks as well,” he noted.

A look at one of Nigeria’s Agent Banking Providers: E-SL and PayCentre

E-Settlement Limited (E-SL) is a diversified financial service provider focused primarily on transforming the payment services landscape in Nigeria and Africa. PayCentre was established in 2016 as the agency banking arm of ESL, mainly focused on driving financial inclusion through financial agents.

PayCentre currently boasts nearly 50,000 network agents (2018: 1,300), with plans underway to increase this number in the future through disruption. PayCentre’s unique solution offering is seen from its leverage of different platforms (mobile POS, android phones, and mobile applications) easily accessible by the unbanked population in Nigeria.

According to Edward, a PayCentre agent, the portability of PayCentre’s mPOS, the transaction processing speed and the application’s inbuilt functionality that enables the agent to automatically login disputes are factors that distinguish PayCentre from competitors. Auto disputes, a feature pioneered by PayCentre, has since been copied and implemented by other agency banks like Firstmonie and Access Closa.

Transaction volumes and values have also increased dramatically on the PayCentre platform. About 7% of respondents in a 2020 survey by EFInA said they process their most transactions on PayCentre platforms, a significant performance relative to big incumbent financial banks like Access, Zenith, GTB, and UBA.

PayCentre has processed nearly N1 trillion in transaction value since 2018. Within the last three quarters of 2020, transaction value processed by PayCentre grew by an average of 29% quarter-on-quarter, bolstered by the COVID-19 pandemic that saw an increased appetite for agency banking.

A shower of good things

PayCentre has distinguished itself as a pacesetter in the Nigerian agency banking space, a feat achieved less than five years after the company commenced operations. Speaking on instant settlement, one of PayCentre’s success drivers, Olaoluwa Awojoodu, the CEO of PayCentre, said: “Before we introduced instant settlement, the normal thing was for agents to do a transaction and get money the next day. We switched to an instant settlement because we discovered that agents needed the money instantly.”

In addition, the process of onboarding a new agent onto the PayCentre platform is usually seamless and getting the mPOS is fast. “So far, PayCentre has elevated my business in the sense that there is no cumbersome procedure and unnecessary delay when getting the device,” Edward, a PayCentre agent, noted. “This has helped me to establish more outlets faster than I could if I was to depend on commercial banks.” For Leonard, another PayCentre agent, the company stands out from other platforms because they do not burden their agents with meeting unnecessary targets.

The Nigerian agency banking space is changing rapidly, especially as new entrants with the financial muscle and solid infrastructure occasionally churn out disruptive ideas to challenge the power of incumbency of legacy financial institutions. PayCentre has the first-mover advantage, introducing the instant settlement system and the dispute-logging functionality in its agent application. One such benefit is that it encourages patronage and enhances loyalty to a brand. PayCentre should strive to ensure it is ahead of the market in strategy, innovation, and creativity.

According to Olaoluwa, capturing the African market is the next priority for PayCentre. “Our research has shown that most African countries face almost the same challenges regarding financial inclusion, so we are working on pushing our product to other African countries”. Other projects in the works for the company include using their agent network as valuable infrastructure to push other financial services and products such as microloans, insurance, access to credit, and so much more to underserved communities.