The Business of Cocoa 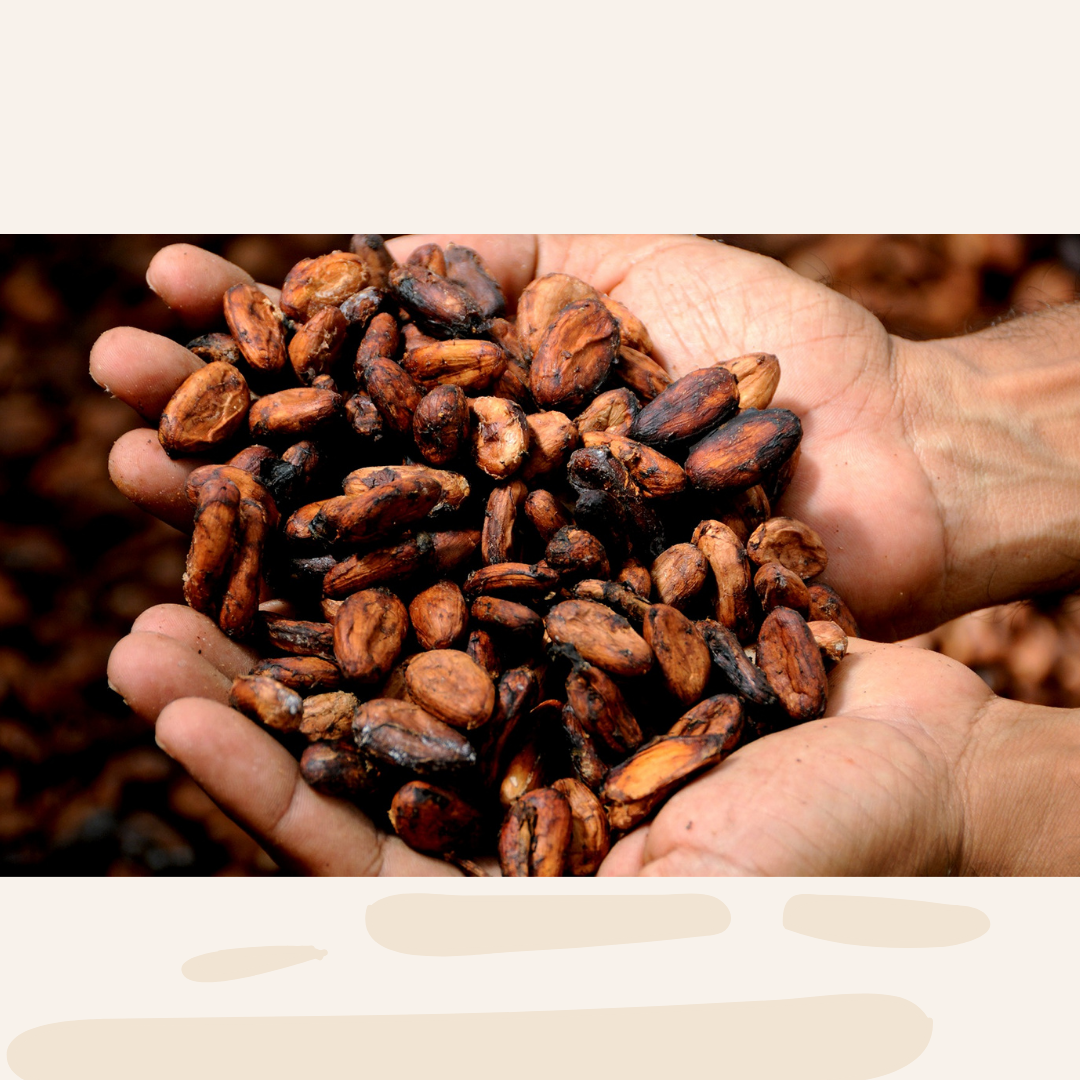 The Business of Cocoa

Chocolate. That is probably the first thought that comes to your mind when you think of Cocoa, and you wouldn’t be wrong, as Cocoa is the main ingredient in the production of chocolate. Other uses include cocoa butter (used on the hair and skin), cocoa powder, cocoa liquor, and cocoa husks used as an organic fertilizer.

Cocoa, or if you prefer its scientific name, Theobroma cacao, is worth more than chocolate, though. Thriving in high temperatures, humid conditions, and plenty of rainfall, it is no surprise that Africa accounts for over 70% of the world’s cocoa production. Cocoa is also grown in Asia and Central and South America. While cocoa is produced in tropical regions, it is mostly processed and consumed in countries with more temperate weather conditions.

Introduced to Nigeria by the Portuguese in the late nineteenth century, cocoa quickly embraced the West African soil and grew exponentially. Nigeria is currently the 4th largest cocoa-producing country, only behind Cote d’Ivoire, Ghana, and Indonesia. However, there is quite a production distance between Cote d’Ivoire and Nigeria with the country producing up to 2 million metric tonnes of cocoa. On the other hand, Nigeria’s production level in the last decade has been between 250,000-300,000 metric tonnes of cocoa annually. Numerous factors have been highlighted as being responsible for this decline not least being the general neglect of the agricultural sector for Nigeria’s production and export of crude oil.

In Nigeria, cocoa farms can be found in about 14 states, mainly in the country’s southwest region which accounts for more than 80% of cocoa production in the country. Ondo State is the largest producer in the southwest and Nigeria, followed closely by Ikom in Cross River State. In Ondo State, the major cocoa producers are Idanre, Ondo West and Akure South Local Governments.

Before discovering crude oil, Agriculture was the major revenue generator in Nigeria, exporting cash crops such as palm oil, rubber, and Cocoa. Cocoa represented Nigeria’s highest foreign exchange commodity, with the country being the 2nd highest producer globally. However, after the 1970s, the focus shifted mainly to the oil sector, leaving agriculture on the backburner.

Irrespective of this decline, Nigeria still holds a strong position accounting for 6.5% of global production. Nigeria’s Cocoa is reputable in the international Cocoa market – acknowledged for its strong aroma and smooth flavour. Nigeria’s place in the global cocoa market is mainly due to smallholder farmers, approximately 300,000 – 350,000, who are the lifeblood of Nigeria’s cocoa industry, diligently working every cocoa season to ensure tangible results.

The cocoa sector is thriving in Ondo, evidenced by the revived chocolate factory and the extensive network of cocoa farmers. The state accounts for the bulk of cocoa production in the country and has plans to continue to expand its capabilities, eventually becoming renowned in the whole of Africa. To demonstrate their investment in the development of the Cocoa industry, the state government in 2021 provided 10,000 hectares of land for cocoa farming.

An important aspect of the growth of any crop is the soil. There are four categories of soil in the southwest region which have been so categorized based on their suitability for cocoa production namely; good soil, fairly good soil, poor soil and very poor soil. Research indicates that 62% of cocoa planted in the southwest region is planted on good cocoa soil. This is one of the factors that account for the exponential production rate of the southwest. In addition to the southwest, cocoa can geographically mostly be found in the eastern and southern parts of the country.

THE INTRICACIES OF COCOA FARMING

Smallholder farmers dominate Ondo’s cocoa industry, diligently cultivating the land to ensure a bountiful yield. Experienced farmers rely on seeds from previous harvests to continue the planting process, while newcomers can get their seeds from these experienced farmers or one of the Cocoa associations. Some of the most common methods of growing Cocoa include:

For every one hectare of land, approximately 1,000 to 1,200 cocoa trees are grown. This means that in every acre of land, an average of 400 – 500 trees grow. To obtain these 1,200 trees, 1,500 seedlings are the amount advised to be planted. This is to cover for trees that may not survive. To ensure maximal cocoa output, farmers focus on increasing plant population which also prevents weed infestations.

The original cocoa introduced by the Portuguese was the Amelonado and it is known for its significant chocolate flavour. Today, there are 3 main varieties grown in Nigeria and the rest of Africa. They are;

The cocoa season is estimated to start between October – June of each year, but this is only an approximation. This is due to Cocoa plants’ intolerance for heat despite being a tropical crop, and Ondo State just happens to be the sunshine state of the nation. During the heat and dry seasons, the cocoa tree is under extreme pressure, and some of the trees do not survive. This is why cocoa trees are often intercropped with cassava and plantain suckers, to give the trees some protective covering from the sun. The ideal climate for cocoa is a temperature of 21 to 32 degrees Celsius and well-distributed rainfall of 100 to 250cm.

The rains rejuvenate the Cocoa tree after months of being dried up under the sun. The rain flows into the pods and ensures that the fruit’s seeds and other vital aspects receive the necessary nourishment. As the rains are about to leave, the Cocoa is almost in full bloom, ready for the next stage of its development.

The Cocoa Research Institute of Nigeria (CRIN) is responsible for the development of cocoa varieties in Nigeria. Currently, there are eight improved cocoa varieties which are reported to be; early bearing, high yielding, resistant to major pests and diseases of cocoa, adaptable to cocoa ecologies of Nigeria and with a good physical and chocolate flavour quality.

Cocoa farming across Nigeria is not without its issues, and the challenges are wide-ranging- as seen in the 2021/2022 harvest season threatened with predictions of low output due to pests, climate change and other factors.

Like all crops, Cocoa is susceptible to pest and disease infestations. Black pod disease, the most notorious of Cocoa’s attackers, is a fungal disease native to Africa and is reportedly responsible for the estimated loss of 44% of global production every year. Others include Cocoa swollen shoot virus (CSSV) and Cocoa capsids. Farmers attempt to combat this issue by spraying insecticides and pesticides, usually directly to the cocoa pods. However, this also presents challenges as the cost of these chemicals has risen exponentially over the years, making it difficult for the farmers to access them consistently.

Smallholder cocoa farmers also primarily depend on inefficient but cheap family labour to avoid the cost of hired labour. Other challenges are lack of access to credit facilities, climate change, and the unavailability of extension agents. Most cocoa farmers acquire farming tools, pesticides and other relevant materials through loans obtained from wealthier farmers or cocoa merchants and repay these loans with cocoa output. An arrangement that puts smaller farmers at a disadvantage as whatever yield they get, which may be affected by changing weather, has to be split between repaying their loan and setting aside seedlings for the next harvest season.

Another challenge faced by the industry is the issue of old cocoa farms and inadequate replanting programs. Most of the cocoa trees in Nigeria are between 30 – 40 years old and with the unpredictable and harsh weather due to climate change, they are often hard hit. The extreme pressure brought by the heat and lack of rain affects the production of these trees with some being unable to produce at all or with declined outputs.

Merchants, who are sometimes farmers themselves, are a sort of “middleman” that are essential to the spinning of the cocoa wheel. During harvest seasons, they network with the many smallholder farmers and obtain the best of their produce for onward sale. They purchase directly from the farmers at the cost price using their funds and then sell to off-takers. They have the advantage of quantity as they buy a lot of cocoa from a lot of different farmers. Equipped with this large amount, they can earn more from their own sale.

HOW DOES IT WORK?

The cocoa seeds are harvested from the cocoa pods and dried and fermented in the sun. To elaborate, after the cocoa beans are harvested from the pods, they are either placed in a box with holes at the bottom or placed in a container and covered. The purpose of this is to ferment them as the cocoa bean consists of a seed coat, a kernel and a germ. During fermentation, the seed coat which is responsible for making a bean viable for replanting is destroyed. The germ is killed as well and it is then the cocoa acquires its good taste. The fermentation process is paramount as it determines the quality of the cocoa. It is done within 6 – 10 days, anything less cannot guarantee the destruction of the seed coat which can affect the taste of the cocoa leading to substandard produce.

The next step after fermentation is drying the beans. This is usually done under the sun, with the cocoa beans directly exposed and left for a period of up to 5 days or more. The cocoa beans must be thoroughly dried as badly dried beans are deemed to be of bad quality.

This process of fermentation and then drying turns the seeds into a brownish-red colour, signalling the point the seeds are now referred to as cocoa beans. The cocoa beans are packed up and stored in bags (sacks) ranging from kilograms to metric tonnes.

Produce control is another important aspect of the process. For the Nigerian cocoa industry to retain its global rankings, it is crucial for its cocoa quality to meet international standards. To this end, organizations such as the Cocoa Farmers Association of Nigeria (CFAN) ensure that the produce brought by farmers for sale is of high quality. This due diligence is essential as some farmers engage in unscrupulous activities such as filling their sacks halfway with stones or dirt instead of cocoa beans. This process of quality control by CFAN and other related organizations helps to reduce these practices thereby safeguarding the industry’s dignity.

Cocoa beans also go through a grading process to sort out the best quality beans. This is to ensure nothing but the best leaves the shores of Nigeria.

Being the number one cocoa producing state in the country comes with many expectations, and it is a responsibility that the cocoa farmers of Ondo State do not take for granted. A lot of the farms have been inherited with trees over 40 years old, so it is more than just money for them; it is their legacy and a legacy they work hard to maintain.

The data on chocolate consumption show that cocoa farming is a sustainable business as the demand for chocolate and related products is not projected to decline any time soon. Cocoa is a perennial crop that can exist for decades once properly cared for. This simply means that interested stakeholders should re-evaluate the attention given to this highly profitable revenue source.

Some of the necessary things to be done include; providing access to extension agents who will educate farmers on the best practices to adopt and providing credit facilities to farmers to reduce the burden of other loans. There must also be the rehabilitation and replanting of cocoa farms in order to boost the outputs of older trees and develop newer trees to take over the prime production of cocoa.

Another fundamental aspect that must be considered is ensuring that farmers have access to much-needed pesticides. Recent research shows that it is a significant factor responsible for yield increase. Education on managing the effects of climate change and necessary mitigation and adaptation strategies should also be adopted.